The Small But Mighty Vacuum Cup 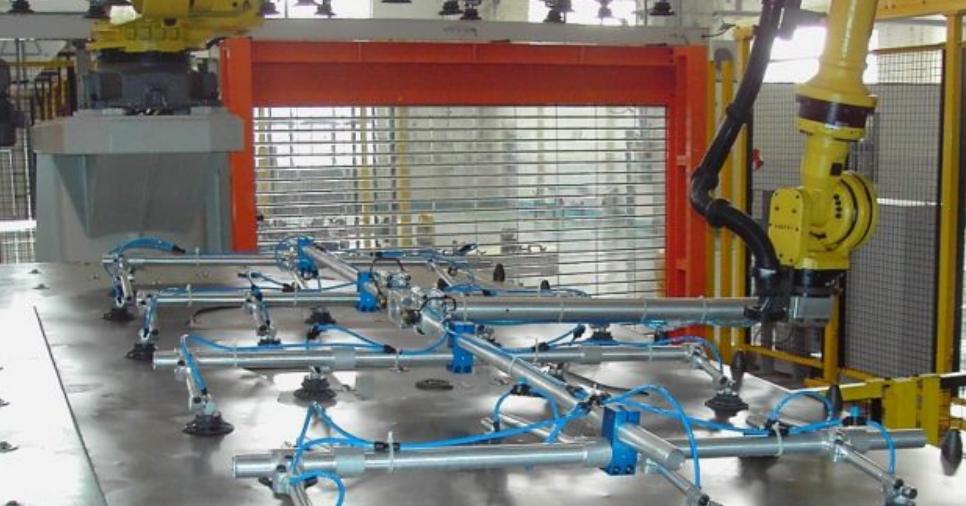 How to choose this important automation system component

Perhaps no system in the manufacturing process has undergone as radical a transformation over the years as the assembly line. In the early days, assembly lines comprised technicians who performed a specific task on the product being manufactured and manually passed it to the next person until it was completely assembled.

The efficiency and reliability of the assembly line reached new levels when many of the tasks involved in the assembly and workholding processes began to be automated. This evolution has continued to the point that most manufacturers now deploy highly technical computer-controlled and -monitored systems that incorporate robots and transfer arms to perform the tasks that once were handled solely by human hands.

Many of these complicated automation systems, however, would be nothing more than eye-catching erector sets were it not for the presence of a component that can appear to be something of an afterthought: the humble vacuum cup. In an automation system, vacuum cups fasten to the end of computerized arms, where they pick up parts or sheets and pass them along the assembly process.

The Air in There

First, to clear up a common misconception: Vacuum cups are not suction cups. Suction cups are pressed onto an object by pushing downward, which creates a seal as the air under the suction cup is expelled. In contrast, a vacuum cup employs a pneumatic vacuum generator with a venturi, which uses compressed air to create the vacuum that allows the cup to grip and lift an object.

The vacuum generator draws the air out of the cup, which lowers the air pressure inside the cup so that it is lower than the surrounding atmospheric pressure. The greater atmospheric pressure pushes the panel onto the vacuum cup and allows it to be lifted. The lower the pressure inside the cup (in other words, the higher the vacuum), the greater the vacuum cup’s lifting force. When the object reaches its new position, the air supply to the venturi is cut off, ceasing vacuum generation and allowing the object to be released from the vacuum cup.

Typical vacuum generators use about 60 pounds per square inch (PSI) of compressed air, with the air delivered to the venturi via flexible polyurethane air lines. Great care must be taken to ensure that the air lines are free of moisture and debris, as the presence of debris can clog the venturi and cause it to malfunction.

The physical characteristics of the part or sheet that is to be lifted and moved determine, in part, which type of vacuum cup should be used in the application.

Dry or Oily Surface? Sheet metal that has been lubricated or treated with a rust inhibitor before being stamped can leave an oily film on the surface that can interfere with adhesion and cause the panel to slip during transfer.

Flat or Rounded Edges? If the part has many contours, it may not have a large enough contact area for a vacuum cup to lift it (see Figure 1).

More Holes or Material? Components that have been perforated or that have numerous closely spaced holes are not compatible with vacuum cups. 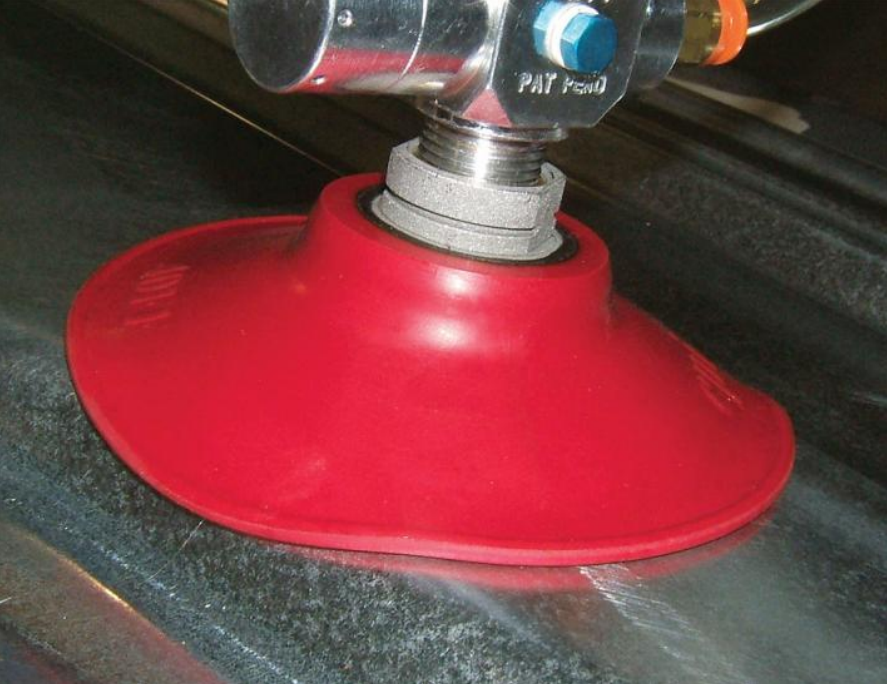 Vacuum cup size, shape, durometer, and tread pattern all have a big effect in high-speed pick-and-place transfer applications (see Figure 2). The vac-uum cup must be able to hold onto the panel reliably during the most stressful points of the automation’s acceleration and deceleration phases.

Shape and Style. The most commonly used vacuum cup shape is round. However, if the cup must grab a thin rail around a car door window, for example, an oval cup might be required. Bell-shaped vacuum cups also are available for adhering to convex or concave surfaces.

Within these shapes are two styles: flat and bellows. The bellows-style vacuum cup is folded like an accordion, giving it the flexibility to pick up items with an irregular shape or ones that are not well-aligned with the cup (see Figure 3). In these instances, a higher vacuum flow is needed to remove the larger volume of air inside. Flat vacuum cups are not as flexible as bellows cups, but they can create a strong grip with a lower volume of air evacuation.

Some vacuum cups are color-coded by hardness for simple identification, maintenance, and replacement.

Tread Pattern. Vacuum cup suppliers have developed their own unique tread patterns, which help determine the holding power or grip of the vac-uum cup on the part surface. What works in one application might not work in another, especially if the sheet’s or part’s surface is dry or oily. Some vacuum cup treads are available in multiple durometers to help increase grip strength.

For instance, a light sheet metal car hood has an easy-to-grip flat surface, and a single vacuum cup could handle the hood’s weight. However, a car hood or panel is so large that it can become unbalanced when moved and the single vacuum cup could drop the part (see Figure 4). In this case, using four or more vacuum cups will help balance the load, making the transfer process more secure as the hood is moved along to the next station in the assembly line.

Specialized applications such as hot forming and injection molding have their own operational considerations.

The hot stamping process can involve lifting and moving components with temperatures higher than 480 degrees F. While some standard vacuum cups can tolerate these extreme temperatures, it is best to consult with the vacuum cup manufacturer to determine if a special high-temperature vacuum cup should be used.

Injection molding requires the removal of hot plastic objects from a mold. The vacuum cup could leave a slight indentation, imprint, or deformation on the newly molded object. In these applications, silicone vacuum cups can be used.

Even with advanced computer controls, modern manufacturing automation systems would not function properly without the vacuum cups that lift and move objects along the production chain. That’s why it is so important to choose the best vacuum cup for the application.